Say Anything has changed a lot since their breakthrough album ...Is A Real Boy came out nearly 10 years ago, and vocalist Max Bemis wants everyone to know it. They are about to release their new album, Hebrews, on Equal Vision Records, and you can listen to two songs from the record above.

"Lost My Touch" is a brooding piano number that highlights Bemis' honest, blunt and sarcastic lyrics. The song begins, "Some say I lost my touch at crafting Say Anything songs," eventually singing into the biting line "just string together lines of smug, self-loathing bile," to the person looking to succeed him. Mid-way through, however, he moves on from his bitterness and anger and sings the inspirational line, "The truth is one day you'll be better than I, the truth is one day I will be eclipsed, the thought of it brings a warm smile to my face, cause I've lived and bled for this." So while it may seem like he's angry at those saying that he and his band are past their prime, really he's hoping that those who come after them will be successful. The last verse of the song, sung by Jeremy Bolm of Touche Amore, is touching in its own way. His vocal style is more harsh, but the piano in the background creates a pretty backdrop and the emotion behind his words pours through.

"Judas Decapitation" continues the self-referential lyrics, but the instrumentals are faster and more aggressive, adding in percussion and strings. Bemis' words in this song are biting, as he trashes indie rock, and fans who don't appreciate change. The most striking lyrical example of those feelings come when he sings about a fan's desire to "chop his family up and feed them to the front row." The chorus however, makes the listener think about what the real message could be as Bemis says "I'm wrong and you're right, that's my thesis here tonight."

Hebrews is available for pre-order on Say Anything's website and on iTunes. For more information on Say Anything, including music, news and tour dates, check out their website. 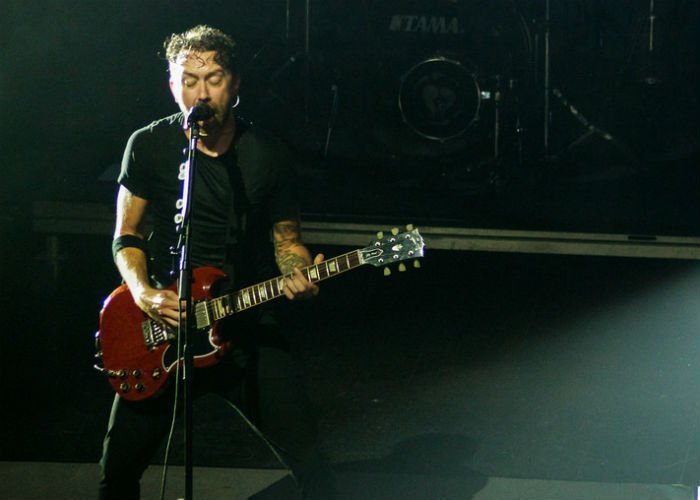 “I Don't Think It Is” – Say Anything [YouTube Full Album St...
Music Indie-Rock Pop Punk Psychedelic Say Anything Full Album Stream
1
565
Back to top
You must be logged in to upvote things.
Registration and login will only work if you allow cookies. Please check your settings and try again.