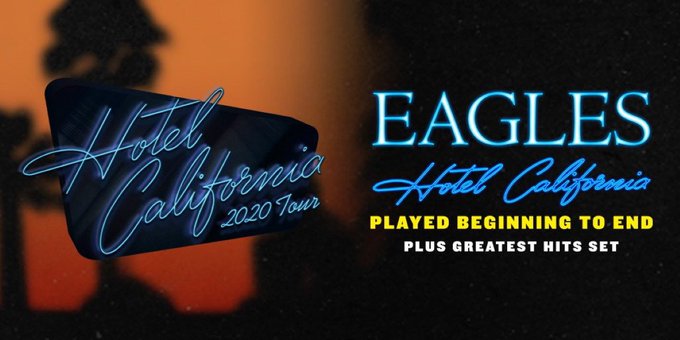 Legendary rockers The Eagles will keep rolling into another decade.

Last month, the Eagles announced a 2020 spring tour for February through April, with stops at arenas in Atlanta, New York, Dallas, Houston, San Francisco, and Los Angeles. This week, they added seven new dates — a second Dallas show plus multiple nights in Denver, Saint Paul, and Phoenix — due to high demand. On the tour, the group will perform Hotel California in its entirety with an orchestra and choir supporting them, as they have been doing during their Las Vegas residency. They will also be doing a set of Greatest Hits, stretching out to cover their nearly 50-year history.

Back when people bought and sold physical albums by the millions, music aficionados knew that the Eagles were the only artists to have multiple LPs in the list of Top 10 record sales of all time. Their Greatest Hits was #2, trailing only Michael Jackson's Thriller, while Hotel California was not far behind with over 40 million sold.

The Eagles All Tour Dates and Tickets

When do The Eagles 2020 tour tickets go on sale and what is the presale code?

Tickets for all dates are now on sale. Keep in mind, each date is different and details are subject to change. Click through the individual concert links for more information about the show you're interested in.

The Live Nation / Ticketmaster presale password is ROCKSTAR and the LN Mobile App code is COVERT. American Express cardholders can use the presale password INGOLD, but you'll need the card to complete your purchase.

We recommend following The Eagles on their social media accounts and signing up for their free email newsletter (bottom of page), in addition to checking your local venue’s social media and email subscription service, to get the most up-to-date information.

Since Glen Frey passed away in 2016, the Eagles have continued to be actively touring and holding down a Vegas residency. The band's current lineup consists of Don Henley, Joe Walsh, and Timothy B. Schmit, with Deacon Frey, Vince Gill, and a group of backing musicians and vocalists.

Pick up the band's 40th anniversary edition of Hotel California on Amazon. For more, check out The Eagles' Zumic artist page. The Eagles Add 2019 Las Vegas Tour Dates: Ticket Presale Code & O...
Tickets Classic Rock Country Rock Rock Joe Walsh The Eagles
3
13
Back to top
You must be logged in to upvote things.
Registration and login will only work if you allow cookies. Please check your settings and try again.